Our Story told By The Times Herald

PORT HURON, MI – September 12, 2010. Inside a 105-year-old Port Huron church, once-dusty chandeliers now sparkle. The leaking roof is patched, and holes in the walls are plugged. Fresh woodwork is in place.

Outside, neatly painted blue lines trim the newly whitewashed brickwork. Piles of debris have been hauled away.

“It was in bad shape,” the Rev. Antonio Velez Jr. said.

Velez said he hopes to fill the 100-seat church to capacity today — and then some — after canvassing the neighborhood door-to-door and inviting local dignitaries. Some of the extra lures are music, food, a fire-truck tour, a bounce house and a bicycle giveaway. 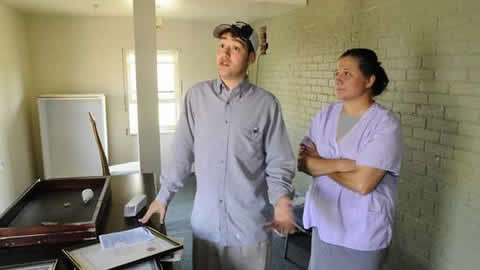 Velez, 35, of Flint is in transition himself.

He intends to move to Port Huron with his wife, Violet, and their daughters Evangelina, 7, and Esther, 6. As a complement to the church, their new home should be ready in about a week.

It has been “hard, hard work getting it together,” said John Velez, 28, of Flint, the pastor’s brother, who stood outside the church earlier this week to survey the painting job he had undertaken.

Members of the Velez family have been commuting to Port Huron from Flint for weeks during the church’s restoration. They’ve been joined by others who’ve come to feel a family connection through their faith.

For about a month, a lot of hope and sweat equity have gone into building the congregation of some 30 souls and establishing a spiritual home for them.

Just a year ago, in August 2009, Antonio Velez stood on the corner of McMorran Boulevard and Military Street, distributing fliers offering home visits for Bible study.

He found people receptive to his message. In time, Velez was providing ministerial services and counseling for more than two dozen local residents, and having religious services in his parishioners’ homes.

While working as a chaplain for the Flint office of Heartland Home Health Care & Hospice, he came to St. Clair County to visit inmates and the sick, and offer people various ministerial services –counseling, emotional support and help with alcohol and drug problems — in their homes.

“We wanted to implement what we’ve been doing in Flint,” Antonio Velez said.

Eventually, he decided his new congregation needed a more permanent base and the group began looking for a good location.

Now the membership is leasing a former Methodist Episcopal church building — built in 1905 at 24th and Moak streets — from Dave Mattocks of Fort Gratiot. The structure became available earlier this year when Jesus Lighthouse Ministries moved out.

Velez said he has received additional support from members of his home church, South Flint Tabernacle in Burton. Fifteen to 20 people pitched in to help fix up the building while he and his wife commuted from Flint about three times a week.

“It’s a very positive transformation,” he said of the work accomplished so far.

He intends to maintain the momentum of building a congregation by reaching out to the surrounding neighborhood and providing additional services, such as community dinners and assistance for homeless people.

Earlier this week, the new office at the rear of the church barely was furnished and the bookcase shelves were empty, but the space remained full of potential — and Velez said he’s poised to make it happen.

“Having a building like this,” he said, “will give us the leverage we need to fulfill our vision.”